At work, a software package that I’m dealing with requires that lists of file extensions for whitelisting or blacklisting be case-sensitive. I’m not sure why this is the case (no pun intended), but it is not the only piece of software that I’ve used with this issue.

For fun, I wrote a small PowerShell function to generate a list of the different possibilities. It does this by looking at all of the binary numbers with the same number of bits as the extension, interpreting a 0 as lower-case and 1 as upper case.

I pre-calculate the relevant powers of two in $powers, since we use them over and over again. I also do the upper/lower once at the beginning and do some (gross) indexing to get the proper one.

Here’s the output for exe: 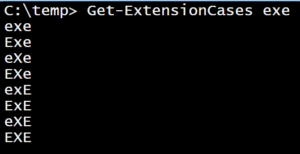 It was a fun few minutes. Watching longer output scroll by can even be somewhat mesmerizing.

Let me know what you think

P.S. PowerShellStation was named one of the top 50 PowerShell blogs! Thanks to everyone for stopping by and listening to my rambling.