I just pushed version 0.9.18 of WPFBot3000 to the PowerShell Gallery and would love to get feedback. I’ve been poking and prodding, refactoring and shuffling for the last month or so.

In that time I’ve added the following:

Mostly, though, I’ve tried to focus on one thing: reducing the code needed to build a UI.

To that end, here are a few more additions:

In case you haven’t looked at this before, here’s the easy demo: 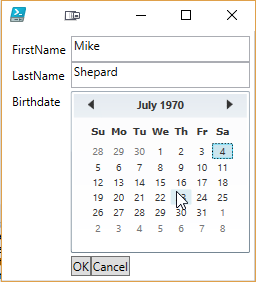 There are tons of features to talk about, and I’ll be following up with a series of posts illustrating them.

Are there things that are missing?

Are there things that are broken?

Is something difficult to do that shouldn’t be?

Feel free to enter issues in the github repo or let me know through twitter, email, Reddit, etc.